“I have endeavoured in this Ghostly little book, to raise the Ghost of an Idea, which shall not put my readers out of humour with themselves, with each other, with the season, or with me. May it haunt their houses pleasantly, and no one wish to lay it.”

Their faithful Friend and Servant, C.D.
December, 1843.
(from the Preface to A Christmas Carol, original edition)

It’s all Dickens in our house, these days. I have a seven year old playing the part of Tiny Tim in the city’s production of A Christmas Carol: he’s rehearsing twenty or so hours a week and learning to sing notes no voice related to my own should ever decently attempt. Dave and I ferry him to and fro and discuss Victorian concepts of charity and debate the merits of his various fake English accents. We’ve also introduced his younger sister to the story via The Muppets so she doesn’t bolt in terror from our front-row-centre seats at the matinee when we take her to see him. 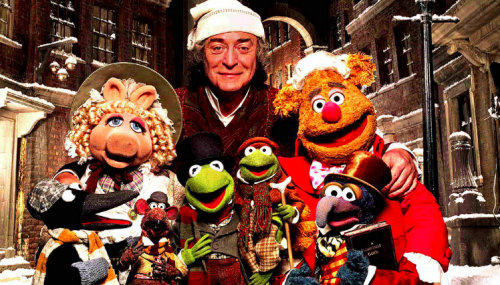 The movie-watching unfolded something like this:
five year old: Scrooge is bad!
me: Scrooge has made the mistake of thinking money is the only important thing in life.
five year old: Why does Scrooge want everybody to work on Christmas?
me: He can’t imagine anything else useful besides working, honey.
five year old: Scrooge leaves the little bunny in the cold!
me: Yes. At first he does, because he believes nobody else deserves anything of his.
five year old: Scrooge needs to learn to share!
me: Well, yes. And he does, right? He doesn’t want to live a life where nobody remembers or cares about him. So he opens his heart.

In the midst of this heartwarming tale of greed and redemption, a chill of doubt and fear struck me, and a cynical sub-narrative ran through my responses. Am I setting my children up for cruel disappointment by letting them believe in…Scrooge?
me (muttering): Power doesn’t seem to be as lonely these days as it was for the Victorians.
five year old: What?
me: Nothing.
five year old: Scrooge is sad because people say bad things about him when he’s not there.
me: Maybe the 1% should read what Twitter has to say about THEM.
five year old: What?
me: Nothing. Sorry. I was just thinking we still have some Scrooges in the world.
five year old: Why does Scrooge leave the poor bunny in the cold and throw things at him, Mommy?
me: Scrooge likes to believe that the people who don’t have what he has don’t deserve it. This is a mistake lots of people make, sweetheart. You should read the comments in The Chronicle of Higher Education sometime.
***

By mid-Victorian standards, the unredeemed Scrooge may have been a terrible, isolated cad. By the measure of the moment, his hearty embrace of a second chance at humanity seems to make him a less likely figure than Santa Claus.

Can I really raise my kids to expect that all it takes is a couple of ghosts to rid a heart of avarice and derision? Scrooge’s early outlook on the world was written as a scathing indictment of unchecked industrial-era capitalism, but he says little worse than can be found in any clot of online comments any given week…and not in the underbelly of Reddit, but in ye olde academic blogosphere.

Are there no prisons? the usual suspects snipe to the precariat who have not achieved tenure.
Are there no workhouses? they sneer at all who dared specialize in disciplines that aren’t, effectively, economic engines of their own.

When the ghosts of Christmas past arrive to point out that many struggling scholars chose their disciplines some time ago, as part of very different economic and cultural narratives? It doesn’t seem to register. Even when a Tiny Tim is held up, the first in his or her family to ever GO to college? Deaf ears. As one of these Tiny Tims who chose the field of education out of the best of intentions 20 years ago at 21, the year before the teaching market collapsed here and all the teachers stopped retiring, let me tell you: in a lot of families, just going to SCHOOL is a big, foreign, intimidating thing. When no one in your life can explain the difference between sociology and neuroscience and everyone you know just works at whatever job they can get, the concept of choosing a field based on return on investment isn’t even on the radar. Yet kids are just supposed to KNOW. Perhaps if the commenters spent their surplus hours consulting in local high schools rather than soapboxing on the internet, they could help save future generations of bright deserving youth. But let me tell you, even neuroscience ain’t a ticket to Easy Street these days, Mr. Scrooge, sir.

And when the ghosts of Christmas future intone that the tenture track is dwindling and in fact that higher ed would currently run aground in 20 minutes if all who teach within its hallowed halls were offered job security and a living wage? More selective hearing. The deserving will make it, runs the Victorian logic of parsimonious “charity” that only extends its warmth to those it recognizes as kith and kin, fellow winners in an increasingly stacked and unsustainable game.

(This is all to say nothing of the larger excesses and abuses of global post-industrial capital, of course, before anyone jumps in with that particular rhetorical parry. Western society’s most educated are hardly a sympathetic lot compared with those who mine the raw materials for our smart phones or who labour in condemned buildings to make the clothes we wear. Or those without the privilege of education in our own cities and towns. Fully agreed, full stop. That does not mean the increasingly disparate field of our own industry and agency is undeserving of regard.)

Secure or precarious, we are all tied like Scrooge to our desks these days, trying to fit more and more work and possibility into the same old 24 hours. If you have a reasonable job in academia after studying for half a lifetime? Please expect to work increasingly long hours on the treadmill for the privilege of believing you have not been left behind. If you don’t? Better bust your hump and distinguish yourself ever further, ever higher. And if the ghost of Christmas present dares show his jolly face and suggest you leave your toil for leisure?

The academy – and the rest of post-industrial capitalism – suggests you simply make leisure of your toil. We work on ourselves and our careers and our merged personal/professional identities, here in these convenient online spaces, around the clock.

We none of us have time for redemption, these days.
***
This all hits close to home because it is what I research. And I research it in the stuffed gaps between kids’ rehearsals and laundry and writing and presentations and sleep, like a proper 21st century scholar. And then occasionally I have it reflected back to me from a perspective that turns it all on its head and I feel as if I am standing in a Victorian street in my nightshirt and bedcap, peering in at a scene and pleading, “No, spirit! No!”

A week ago last night I sent out notifications – invitations, thank yous, regretful ‘no’s to the generous people who came forward to volunteer for my upcoming dissertation research. I had a particular bounty of women from Australia, mostly white, mostly mid-career, and so one of the people I said yes to was almost a no until I plotted out my demographics differently and realized I had a gap that she might be able to speak to. I’d heard her voice for the first time ever just the week before, live from Australia in a fabulous late-night riff after my #wweopen13 live session ended. Kate.

She said yes, she’d be in my research. And then she dropped a little bombshell, gently, as you do when you are new to standing in the space where your audience’s jaw goes slack. She said “I’ve just been diagnosed with breast cancer. Just last week. The day after we talked.”

Yesterday morning, I woke up to a post she’d published as what can really only be termed a wake-up call. She said, “You don’t have my consent to use my remaining time in this way. What do we do about the way in which overwork is the price that is now demanded for participating at all?” And then, “Hope is the alibi for inaction: what we need is the courage to put work itself at risk.”

And I don’t know. Nor do you, likely. But a Christmas Carol played a major part in creating the public, political will to temper the excesses of industrial capital. I’d like to imagine Kate’s words could be the scathing indictment of post-industrial academia that we all need in order to reframe the pretend volunteerism that underpins so much of what keeps institutions going these days, without any real promise of reward or belonging in the mix. Perhaps we need this kind of story in order to be able to see the grotesqueries of our own culture, the spectres of our fear and our cultivated insecurity. Perhaps if we can see and own them, there is at least a chance of mitigating them.

But do not misunderstand. As Kate makes clear in the post, her diagnosis impels her and frees her to speak, but it does not make her different from any of the rest of us: “…it doesn’t make me differently mortal than anyone else.  We are neither vampires nor zombies, whatever the craze for playing with these ideas: we are humans, and we are all here together for a very short time, historically speaking. And so that being the case, the question facing us all is this: what do we do about work?”

That’s the thing. Kate is not Tiny Tim: we all are. And we are our own Scrooges, too, trapped in habits that will not magically change overnight, no matter the ghosts that visit. But the spectre of our own humanity and mortality needs to be one we all begin to pay attention to, and speak for. With courage, not just hope.

3 Comments → god bless us, every one