For my birthday back in January, Dave bought me a Leonard Cohen biography.

He bought it because Cohen is still alive. David Bowie – who for more than thirty years was my imaginary boyfriend and the person I wanted to be when I grew up – is dead. And I woke up the morning of January 10th and realized:

a) me & Bowie are never gonna have that conversation about identity. dammit.
b) life is short .

But I turned 44 on a paid-for plane trip back from London, so not all was ashes. I gave talks at the LSE and the Tower of London and I made a side pilgrimage to the street where the Ziggy Stardust album cover was shot the week I was born, and I woke up in my own bed the morning after I got back and there was Leonard Cohen waiting for me in the only form he or Bowie will ever be waiting for me, and I opened up the bio and the first lines I saw were Cohen’s poem that begins:

Marita, please find me.
I am almost thirty.

And then I laughed some more and it was only faintly hysterical.
***

But my point was about identity.

Given the timing of the London trip, I turned talks about academic Twitter and orality and literacy into a Bowie tribute of a sort.

Bowie songs made up the titles of half my digital identity posts back when I started this blog. I firmly believe thirty years of watching him navigate time and selves prepped me well to live in a world of hypervisibility and monetized identity and blatant performativity.

Or, you know, social media.

But I’d never fully mapped it out.  So before I got into Twitter’s collapsed publics and what Meyer (2015) calls the “smoosh” of orality & literacy, I laid out – with images and lyrics and some core points, the idea that networked identity is very much a Bowie approach to identity.

Fluidity, fragmentation, the vision and chutzpah to stand just on the edge of rising trends and embody them for audiences…notable qualities of successful networked identities.

But for scholars in particular, the core of the Bowie approach is a distinction between role and identity.

It used to be that the personal/professional axis generally divided lives into separate domains, at least where the possessors of said lives took on paid roles outside the domestic realm. In most fields – and certainly in academia – such paid roles tended to be stations within articulated, often hierarchical systems. Or organizations. Or institutions. A person – often a dude – showed up for his or her job and fulfilled clearly-delineated responsibilities that were parallel to those of other people working in similar roles, until such point at which a higher up determine he or she was worthy of another role.

Whatever kind of special snowflake this person secretly imagined him or herself to be had to be enacted off the job, at home, in the personal domain.

Under sway of this broad societal norm, only those rare animals who became celebrities of some sort or another made their individual identities – their distinctions rather than their interchangeability – the core of their professional lives.

(Enter Bowie. But Bowie was not just any celebrity).

Gossip rags vouch for the fact that a great many people catapulted to fame not only discover that the collapse of personal/professional identity results in a parallel and alarming collapse of privacy, with the public working self taking over 24/7…but for many, that public working self quickly becomes a stale trap of typecasting, minimizing their creativity in exchange for a single hypervisible public image that they tended to be pilloried from departing from. Alas, poor Fat Elvis.

Bowie may not have been the only celebrity to manage to change successfully with the times AND maintain – some of the 70s aside – a modicum of personal privacy regardless of public scrutiny and visibility…but he did a smashing, savvy job of it, for the most part. As he did a smashing job of messing openly with constraints of gender and sexuality.

Selves were things Bowie picked up and put down, serially, while managing to create an overarching identity as someone so utterly distinct that people repeatedly referred to him as “otherworldly.” 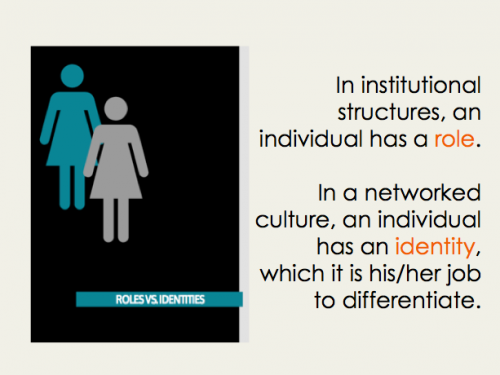 ***
So what does this have to do with academic Twitter?

Our academic institutions are still built on roles. Tenured roles – or permanent academic roles, for those outside North America – are an endangered species, but the hierarchical, institutional model still conceptualizes labour along roles’ interchangeable, impersonal terms.

My research into academic Twitter the last couple of years was pretty emphatic that Twitter enables actively-participant (or resident) scholars to operate beyond what Boyer (1990) would have called the “hierarchy of functions” of scholarship. Twitter doesn’t just situate users within the realm of networked scholarship…in can enhance their sense of community and engagement in their work in general.

And it can open up paths to the development, performance, and circulation of scholarly identities…even without roles. People who may not have institutional roles or academic jobs or status in the hierarchy can become known for their work and their ideas, via Twitter and broader networks of participation.

This changes things. Junior scholars and grad students and contingent academics can create forms of visibility and legitimacy within the blurred space between media and institutional scholarship that do not match their institutional status, or lack thereof.

But it changes more than who gets to join in some aspects of the academic conversation. It changes how.

When, on your campus, you need someone who does things that seem “digital,” you can look for somebody who has that word (or some other word in permanent danger of becoming imminently outdated…I’m looking at you, elearning) in their title…or you can look for the person who for inexplicable reasons seems to do that stuff. Sometimes it’s the same person, but sometimes it’s better if it’s not.

Because humans are funny. If we approach someone on the basis of their title or role, we tend to approach them within the boundaries of the institutional hierarchy. I suspect many folks in higher ed still secretly associate all things digital with the 1996-era title “webmaster”…which meant you had a seat at neither the faculty nor the admin table.

But if somebody is approached based on an interest in that person’s differentiated, visible, searchable expertise and identity…the conversation changes. The hierarchy is a little bit undermined. The conversation tends to depart far more quickly from what’s happened before to what *might* actually be possible. New things are more likely to emerge.

This isn’t rocket science. It’s just a networked approach to identity and interaction.

There’s a catch, though.

Carving out space as a career individual within a society primarily marked by institutionalized roles is one thing. Bowie had uncanny timing and instincts in this regard.

Carving out space as a career individual within a society – and particularly within a sector – primarily marked by the collapse of institutionalized roles is another thing entirely.

We can all be as Bowie as we can muster in the connective tissue of our networks. But those do not – at least for scholars, nor for musicians either, at least in the way they used to – an industry make.

A ton of us live here, straddling this strange gap between academic roles that don’t – and may never – exist for us, and academic-ish identities that we use to contribute in the ways we can, whether to institutions or just to the broader conversation.

Paying our rent every day in the Tower of Song, as it were.

Maybe Leonard Cohen, who found himself swindled out of everything in his seventies and hustled his way back on stage, touring til nearly eighty in his sharp gangster suit, is who I oughtta plan to be when I grow up.

Somebody call me when we figure out alternatives?