So, the Typhoid Mary of education disruption, Sebastian Thrun, has admitted that venture capital interests are not well-suited to the complex structural realities of public education, and moved on to professional and corporate training.

(Yes, Audrey Watters and Mike Caulfield are both quite right: this doesn’t mean venture capital is moving out of education’s purview, nor can educators just “shrug off lousy educational practices because they occur outside the walls of formal education.” Agreed. But the professional training end of education has always been a business: it’s never had the same public and societal responsibilities, nor scope of systemic challenges.)

But if the “solution” of venture capital MOOCs is off the table, maybe we can stop getting mired in the plate of shiny red herring it pretends to offer to all these real issues, and actually work on them. Maybe across some of the fault lines the hype has created.

To me, Thrun’s change of course changes the whole discussion, because it forces the flaming hype of MOOCs as replacements for systemic education to separate into the multiple conversations that have been conflated under that rhetoric for more than a year. Udacity’s about-face may not prove the VC model for education won’t work, but it sure lays out the fundamental disconnects between shareholder accountability and messy public education real nice.

Let’s talk about that.

Yesterday’s news might even mean we stop talking about MOOCs at all, since Thrun’s putting distance between his new initiatives and the word (Rolin Moe looks at this and the whole Udacity announcement in far more complexity here). Makes sense. By definition, corporate training is structured to be neither massive – even in possibility, as it’s bounded by the corporation’s limits of who belongs and who qualifies – nor open.

Then, those of us interested in what massive and open can mean, learning-wise, can go back to whatever we decide to call networked open online learning, aka the MOOCs outside the venture capital model. As George Siemens said this morning, “Make no mistake – this is a failure of Udacity and Sebastian Thrun. This is not a failure of open education, learning at scale, online learning, or MOOCs.” Or, in Martin Weller’s words: “Does this mean MOOCs are dead? Not really. It just means they aren’t the massive world revolution none of us thought they were anyway.”

…And in terms of what I think MOOCs are, here’s a taste of a small, semi-open one I’ve really enjoyed being a part of this past week.

I’m one of the facilitators and participants in the #wweopen13 MOOC on Online Instruction for Open Educators. I’m teaching a short conceptual-ish introduction to the idea of networked identities, for people interested in teaching online.

What do identities have to do with teaching online? I think of identities as being at the centre of networked participation, and the ethos of participation that Lankshear and Knobel emphasize as one of the key “new literacies” for moving beyond just tossing paper-based educational materials onto a computer. Networks are at the centre of online interaction.
(This isn’t to say we don’t have networks in our f2f worlds and lives – families are, broadly speaking and in the extended sense, networked systems that we’re webbed into).
But to the extent to which online engagement differs from f2f, it’s the networked aspects of identity and the ways in which digital technologies shape networked identity that can make an online learning experience very different from just transporting a paper syllabus to screen. In online networks, we rely on identity profiles and practices to understand who is present alongside us and whether we want to engage with them. Others read our identity signals to make the same decisions about us.

Yet the institutional structures and norms that dominate our society and particularly our education system do not foster networked identities. In the midst of all the pressure for educators to somehow prepare students for this mythical “21st century” we seem to be both living in yet still casting as the eternal and exotic future, the whole fact that schooling practices are broadly structured to create herd identities of compliance and uniform mastery rather than networked identities of differentiation is…well…not surprising. But definitely a disconnect.

Here’s the slideshow from my live sessions this week, exploring my ever-expanding “key selves” of digital identities as well as some of the benefits and challenges of identity work as a connected educator, and a cameo from Freire.

Building a Networked Identity: How to Become a Connected Educator from Bonnie Stewart

This weekend, I gave a short presentation at a great little student conference hosted here at UPEI: Difficult Dialogues: Exploring Relationships Between Identities and Power.

(When I say “short” I mean I was still talking when the poor timekeeper started waving the STOP sign in front of my face: it’s been awhile since I tried to encapsulate ideas into fifteen minutes.)

I made a few quick alterations to the slides after the presentation thanks to the really good questions and conversation that emerged, and in hopes of making the ideas reasonably clear on Slideshare even without an audio track. This is the first time I’ve really taken up this particular thread on the intersections between “student” and “networked learner”, so thanks to everyone at Difficult Dialogues for engaging with and supporting these ideas as I begin to work them through.

Learning in the Open:

It’s what I didn’t say that’s more interesting, though
The fact that I ran over time is apt, given how it mirrors my own current overwhelm as a learner.

The presentation troubles some of the categories of student that academia comes with, and how differing forces and logics govern the two spheres and the way learning is practiced within them. But I didn’t go far enough. While I’m a living, breathing advocate for the benefits of networked learning, it may be the problems with it that are the most instructional.

The keynote for the conference this weekend was S Bear Bergman, who gives one hell of a talk on sex, gender and trans identities.  And while what I do may not intersect on the surface with Bear’s work as a thinker or a presenter, ze reminded me of something I know but have failed to transfer over to my analysis of learning and learners.

We are always signalling and reading
Engaging with each other as humans is a process of reading codes and signals.

(Okay, not entirely perhaps: I won’t wade into the “we are all texts” ontological discussion here.) But if our material and discursive signals  to others aren’t readable or legible within the frameworks by which they comprehend the world, we tend to be rendered Other: either seen as transgressive or simply not seen at all.

In identity terms, visibility and speakability are necessary for legitimacy, for non-erasure. Only in the past few years have the identity signals and codes performed by queer and trans people begun to become readable and speakable on a scale that extends beyond those communities and makes those identities visible within the broader society. And slowly, slowly, mutually constituted with the very possibility of this legibility of trans people, society’s concepts of sex and gender are shifting.

Signalling networked learning
So perhaps it is with networks, though with far less advocacy, pain, marginalization and struggle, let me be very precise. But I believe learning – whether in online social networks or straight from the canon, bound in leather – involves being able to read and make sense of the codes and signals being given off by those you interact with, particularly those you expect to learn from. These are what I refer to when I talk about “legitimacy structures” within academia and networks in the final slide of the presentation above. 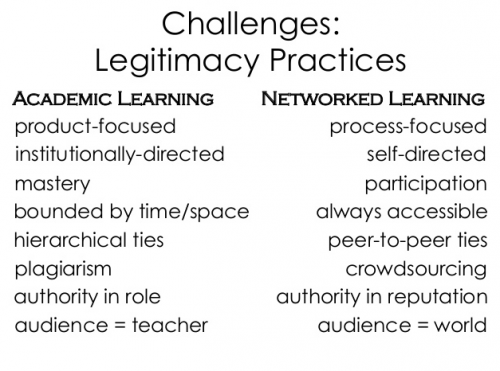 They are, in a sense, literacies. They’re what I’m stumbling towards when I talk about the networked or digital literacies that MOOCs – if they connect people – help develop.

I’ve been struggling to say what I research lately. Is it social media? Identities? MOOCs? Networks? My research is a process of trying to grasp and make visible a few ideas and realities from the midst of a flood. It’s about filtering and reflection and constant observation of moving targets. My sense of focus doesn’t shift so much as the ways in which it’s likely to be understood change all the time.

Part of the problem is filtering: I’ve realized recently that in my dissertation work I’ve failed, so far, to build a robust framework through which I can filter the seven hundred vaguely-related-to-the-Internet-and-learning-and-identities ideas that I encounter out here every day in my brilliant network. I meander in circles, fumbling to re-word and re-work things, trying to translate or adapt concepts I encounter and figure out whether they fit into the big picture of what we’re doing out here in this world of networked practice. Sometimes they do. Often they are rabbit holes. Seldom can I tell the difference in advance.

But what I learned at the conference on the weekend is that the filters and structure aren’t the whole challenge: how to translate and signal what I’m learning to two different audiences is also a process I’m going to have to address overtly. Because there are power structures that support and prop up societal views of knowledge that make networked knowledge and practices appear invisible or illegitimate.

For the many networked learners who are also formal students, this can be a very real problem: it can negate or frame as transgressive what is simply different. And within fields of knowledge and the academy in particular, it makes pressing contemporary conversations about online learning into polarizing and misleading soapboxes about what counts as real.

The lack of face-to-face is not a void, only a lack of literacy
Whether networked learners are formal students within the academy as well, or no, many of us regularly come across sincere – and often deeply-thought-out objections – to the idea of online learning in general, and to its lack of the ineffable quality of authenticity in particular.

I think there are multiple axes of thought behind these objections, some of which lie in determinism or digital dualism or nostalgia or overt privileging of the physical over the virtual. But even among many participants of the MOOCs I’ve engaged in so far this winter – #MOOCMOOC, #etmooc,and #edcmooc – I see a strain of genuine hesitation to fully embrace networked learning as legitimate, or at least as AS legitimate as face-to-face learning.

And I think it’s a literacy issue. These people are, for the most part, highly traditionally literate – many are teachers and academics – and they are, to their great credit, game to give networked learning a try even if they’re not entirely sure it’s valid. But they are new to the game, and they haven’t yet put in the longterm immersion and reflection usually required to build literacies in a new environment: they can’t yet read the signals and codes by which we interact.

Because networked learning is not about technologies, or a lack of the human touch: these are simply common and understandable misconceptions given the narratives that circulate in our culture on the subject. Rather, if it’s truly about networks and not just mass broadcast, it’s about engaging with humans; about performing networked identity via the codes and signals that we digital selves share openly.

Just because that may not be visible doesn’t mean it doesn’t exist. But those of us to whom it is visible…we have a job ahead to continue to assert and translate and help make our identities readable and legitimate in the field of knowledge.