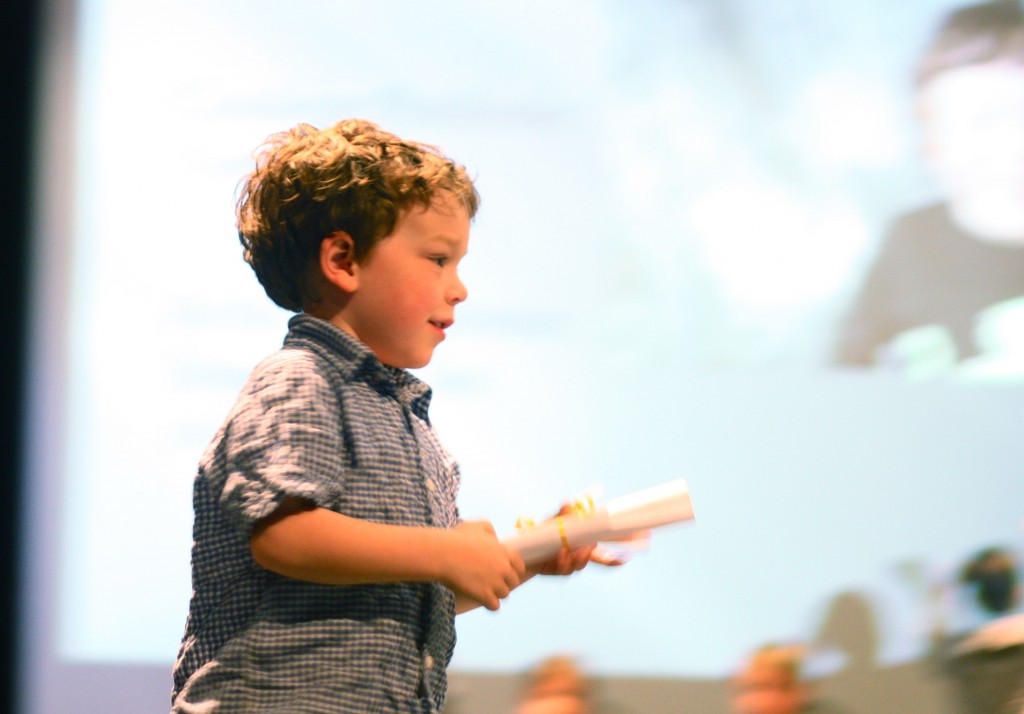 In the end, after all the days of buildup and song practice and excitement and charging the camera battery, I missed it.

Josephine was in her upholstered seat doing a potty dance of Saturday Night Fever proportions, so I ran her up the aisle to the bathroom. He got called up first.

And so it was his father who captured Oscar walking across his first stage with his first diploma, his “graduation” out of preschool and into the formal school system of kindergarten. Fitting, perhaps.

Felicitations, says the scroll, in fancy letters. I unrolled it and smiled, at the formality of his name printed across the page.

Madeleine Grumet’s 1988 opus Bitter Milk: Women & Teaching, says that schooling serves as the delivery of children to the patriarchy.

I picked up the book a couple of weeks back, just as the kids’ preschool year was coming to a close. As an educator, and a student before that, and now a student yet again – someone who has been wrapped up in some form of the system for 35 years – OUCH.

And yet I nodded even as I flinched, reading the words. Grumet put her finger on the piece of this societal project of education that I’ve never been able to quite name, nor shake.

School is the foundation of much of what many of us IN the system want to see change, in schools and in society.

Schooling is powerfully self-replicating, making almost all of us complicit in its protection of its own practices.

Everyone has an opinion about school. Most of us have critiques of school, and schools, and schooling. But no matter the critiques and the shifts – whole language through critical pedagogy to ed reform and a call for standardization – no matter the politics and policies and the thousands of good intentions and spirited efforts and debates, schools march on, surprisingly same from decade to decade. Especially from the vantage point of a six or seven year old kid.

Think about it. The world of kids in the 1950s was relatively different than it is today. According to our cultural myths, at least, they had mothers at home, were sent outside to play, and had apparent run of their neighbourhoods. They’d never seen a carseat or a DS and most would have had more ashtrays in their homes than screens. Some would have never seen a television. They had fewer toys and books, and from the age of four or five, they were expected to entertain themselves in groups for extended hours of the day. If they’d gone with their fathers to work, which would have been seldom as fathers were not expected to be involved or engaged parents, they’d have encountered masculine, hierarchical environments where people performed discrete tasks.

Less supervision and less attention to their interests, feelings, and desires were simply the norms of the day. They were expected to behave and interact differently from children in this generation.

But when those children of the 1950s went to school, they would have encountered expectations very similar to those Oscar will encounter in September. Admittedly, the disciplinary shift is vast. Oscar’s cohort will not expect to be rapped on the knuckles if they breach the rules of the classroom. But those rules and the subjects they creates – subjects who sit, raise their hands, complete discrete tasks independently, and participate in various overt and subtle hierarchies of skill and tribe and class – are remarkably similar.

In spite of the fact that those rules and skills no longer even make for an advantage in the post-1950s job market. What the educational system seems to do best is reproduce itself, getting further and further from cultural value all the time.

We send them into the school system, most of us, with great hopes. Learning. Education. Talisman words. They promise development of our children’s potential, inculcation into the mysteries of consciousness. The lure of the Tree of Knowledge.

What they get – what we all get – is something…other…than that. We get people who learn their place in our culture. In the – however much I flinch at the word – patriarchy, with its implicit hierarchy of gendered behaviours and classed behaviours and racialized behaviours, even as we in our schools and culture pay lip service to inclusion and acceptance and celebration of difference.

That, in the end, is the worldview of the mothers, of the feminized voices within society.

Grumet’s premise is that it is schools – and female primary and elementary teachers, for the most part – who serve to reinforce the nature/culture binary that privileges masculinized “cultured” behaviours over the intersubjectivity of mothers and children, the living with-and-through-another that marks most humans’ early days.

In school, we learn to give over curiosity to passive acceptance, rewarded by praise. We learn to “other” other people, by grades and behavioural sanctions and the message that classrooms as we understand them cannot seem to fail to impart: Some of You Are Doing It Wrong. Some of You are Not Worthy. Some Animals are More Equal Than Others.

It naturalizes the separation of subject and object, of us and them, me and you. It works because it buries its own traces, creating subjects who believe it is simply the way of the world to stand apart, against intersubjectivity and the interwoven world of shared interests. Schools function symbolically, guiding us to adulthood and away not just from the literal worlds of our mothers but from the symbiosis these worlds and their mutual dependence represent.

“Contradicting the inferential nature of paternity, the paternal project of curriculum is to claim the child, to teach him or her
to master the language, the rules, the games and the names of the fathers. Contradicting the symbiotic nature of maternity,
the maternal project of curriculum is to relinquish the child so that both mother and child can become more
independent of each other.” (Grumet, 1988, p. 21).

In other words, schooling creates subjects who internalize the subject/object divide that reinforces patriarchy and so-called culture through the knowledge acquisition and gendering processes that schools and teachers are constructed to see as natural. And parents, products and subjects of the same system, go along, delivering our children to the same inequitable and flawed system even as we gripe collectively about its flaws and failures.

I’ve watched it start this year, in Oscar, as he moved to five days a week in a preschool physically attached to the school he’ll attend next year. He learned excellent French. He also learned a lot about what boys should do. About being shy to be wrong. And about colouring in the lines and thinking skies need to be blue. He learned you can’t talk all the way through Circle Time. And he learned how to court the powerful, how to curry favour in a pecking order and how to spot difference that makes others vulnerable. There was something violent about it all. And yet familiar, utterly familiar.

But that is only because I went through the same process myself. As did you, probably. And so the system goes, self-replicating because we don’t know anything else.

So here I am: mother, educator, student of educational theory. And I have the mother of all dilemmas on my hands.

It’s good, part of me says, to know all these things that school teaches. Not the information ones. The social relations. The power rules. Certainly, we expect O not to talk when others are talking here at home, and it’s useful to know how to handle yourself in a hierarchy.

Learning these things makes you subject to them, no matter which end you come out on. I learned all that crap so well that it’s taken me years to begin to unpack it, to live without waiting for a grade, for an external deadline, for a sense of how I measure up against others. I do not want this for my children. I do not want them to be like me.

And so another part of me sits watching this march of normativity start up, and blows smoke at the spectacle and asks Really? All these years of trying to critique the system from within, and you’re going to go ahead and subject your own child and children to the whole shebang?

Really? Can you not come up with an alternative solution?

We could homeschool, I suppose, or preferably, unschool. I think unschooling is probably – if not necessarily overtly – about trying to uncouple the patriarchy from the educational process. But I am both a product and a purveyor of education in its traditional forms. I have been – gently, maybe, but nonetheless – delivering other people’s children to the patriarchy for years.

A part of what I know how to do, professionally, is a form of serving at the pleasure of the patriarchy itself. I am complicit.

Could I be otherwise? Do I want to be? That, Hamlet, is the question.

I do not believe learning is inherently a patriarchal process, even if the notion of the Tree of Knowledge might be. We do lots of critiques in my classrooms, just as we do in our house. My children, like my students, will inevitably be exposed to the idea that the world and its power relations are constructed, not natural. But could I go further than that, if I were willing and able to carve out the space in this next few years to try to educate my kids myself?

Or would I inevitably replicate what I know, what’s been done to me in the name of learning and becoming “educated”?

Part of me suspects I would. And I wonder if I wouldn’t rather have a nice gentle primary teacher do that to them rather than me?

Part of me prefers my autonomous life, my space. I was no idealized mother, when my children were infants. I work from home, now, but alone. Part of me fears that I do not know how to function without the patriarchal separation of the domestic and the professional, no matter how specious and unnecessary it may be.

In the end, I suspect that I will deliver my children over to some version of a 1950s classroom. Anything else would shock me. And I assume there will be good in it, and bad, just as there was for most of us.

Yet, sitting here thinking about tiny diplomas and the patriarchy and the world I’d like to live in, I recognize that schooling is a choice.

And I marvel and cringe at the power of a system that makes it so difficult for even those of us most deeply embedded in and privileged by its operations to see other options. Patriarchy for the win, indeed.
***

Do you think Grumet’s assessment is fair?

Those of you who have homeschooled, or unschooled…what was it like? What are its strengths and weaknesses, in practice? Do you end up replicating what you know?

And…what role do you think educational technologies could play in shifting some of the power relations involved in children’s learning? Do the peer-to-peer capacities and real audiences of social media offer any real challenge to the traditional practices of hierarchy in education?